Michael Beckert likes to doodle. During grade school, he would create flipbook animations of skateboarders in the corners of his notebooks. And he has continued doodling since coming to Einstein for graduate school. 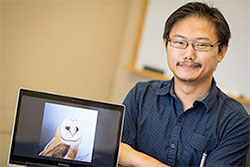 Michael Beckert with a drawing of a barn owl from the lab.“My classmates tease me, because during lectures I’ll often doodle. But I’m drawing what the professor is discussing,” said Mr. Beckert, who is a sixth-year Ph.D. candidate in neuroscience. “I think visually, so it’s easier to understand something if I draw it. I devise my own flow charts and diagrams, which help me remember things better and make more sense than writing them out.”

At Einstein, Mr. Beckert has developed his artistic abilities well beyond doodling in class. He is staff illustrator for the scientific journal Einstein Journal of Biology and Medicine that is produced by students and postdocs. Future issues will include two graphic reviews he has drawn in conjunction with articles by other students.

He also is Einstein’s unofficial “freelance scientific illustrator,” a title that a career advisor urged him to include on his résumé. In that role, he has drawn animated representations to accompany classmates’ dissertations, created covers and graphics for friends’ research papers and even designed logos—including one for Dr. José Luis Peña’s lab, where he is researching avian forebrain structures in the barn owl brain for the dissertation he’ll defend early next year.

Growing up, Mr. Beckert learned and embraced his family’s ideal:  “Whenever possible, help others.” His parents exemplified this, his father as an emergency medical technician, and his mother through her work with mentally disabled individuals. Those at Einstein who know Mr. Beckert describe a gentle, humble person who is always willing to offer his assistance. 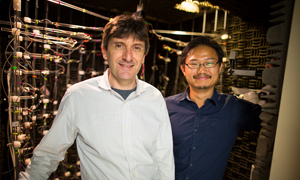 Mr. Beckert with his mentor, Dr. José Luís Peña.He initially wanted to become an orthopedist or a pediatrician, but that changed when a professor at Siena College suggested that he consider research. “That advice clicked senior year,” he said. “I took a neuroscience course and thought, ‘This is really cool.’ I realized that research was about creative ways to solve problems.”

He added, “Now I’m doing what I can through research, trying to find answers about unknowns that could be helpful to mankind.”

He describes neuroscience as the “last frontier” of biology because “we still have little idea about the brain as an organ and all of its functions. There’s so much more that we can learn and discover.”

“Mike is willing to take risks and challenge himself,” observed his mentor Dr. Peña, professor in the Dominick P. Purpura Department of Neuroscience. “He was the first in our lab to successfully use ‘tetrode recordings’ for studying the barn owls’ brain. It’s technically demanding, but he’s done it and is always willing to explore new techniques.”

Mr. Beckert’s approach in the lab mirrors how he creates art. Aside from taking a couple drawing classes during college, he has no formal art training; he is self-taught and enjoys working in several media, including pen and ink, charcoal, oil paint and digital drawing. Perhaps the greatest challenge he has tackled at Einstein is using art to explain complex scientific ideas to a broader audience.

Last year, when Sunita Reed, director of multimedia communications at Einstein, produced a video profile of then graduate student Dina Tsukrov and her HIV cure research, she planned on using whiteboard animation to explain the research concepts. She asked Dr. Tsukrov (now doing her postdoc at Massachusetts Institute of Technology) if she could draw. Dr. Tsukrov enlisted the skills of her friend, Mr. Beckert, who had already provided illustrations for her dissertation.

Mr. Beckert created the illustrations using markers on a white board, which were then animated by freelance editor Charles Young. The finished product brings the process of radioimmunotherapy to life through animated drawings of smiling healthy cells, frowning infected cells and antibodies wearing sunglasses.

“What Mike has teamed with his colleagues to do is tremendously important,” said Dr. Victoria Freedman, associate dean for graduate programs in biomedical sciences. “They took scientific ideas that could be difficult to grasp and translated them to a format that is accessible to everyone. It’s critically important for scientists to be able to do this.”

More recently, Mr. Beckert assisted Ms. Reed again, creating the illustrations for another whiteboard animation video, called “TB Wars,” to illustrate the research of Ph.D. student Steve Kennedy. In the video, as Mr. Kennedy explains why we need a tuberculosis vaccine, Mr. Beckert’s drawings of tuberculosis bacteria as cigar-smoking pirates flying airplanes and T-cells acting as army generals create a scenario that a lay audience can understand and enjoy. The science is serious and complex, but Mr. Beckert’s art makes it easy to understand.

“Mike has a gift. He’s able to bridge the science with his art, and he also brings fun and humor into it,” said Ms. Reed. “I love watching the facial expressions and sounds he makes as he imagines and translates onto the white board how the characters are feeling.”

Just as his notebook doodles have helped him better understand new material, Mr. Beckert hopes his illustrations can do that for others and make science exciting and approachable. After completing his Ph.D., he sees a career in science illustration as a possible pursuit that would allow him to combine his two loves. “It’s definitely among the options I’m considering,” he noted.

“Science doesn’t have to be this subject that every kid hates unless he or she is going to be a doctor or a scientist,” he added. “Through my illustrations, I try to show that science isn’t scary. And making science more accessible and interesting for everyone is something I really enjoy doing.”