Becoming a Scientist and a Leader

Jessica Doerner came to Einstein to become a scientist. The receipt of her diploma at graduation on Wednesday, May 25, 2016, will mark her achievement of that goal. But during her time at the College of Medicine, she also learned that she has the qualities of a great leader. 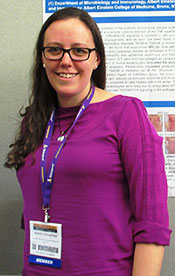 Jess Doerner, Ph.D.“Jess had a level of maturity you don’t often find in first-year graduate students,” recalled Dr. Chaim Putterman, professor of medicine and of microbiology & immunology, and chief of rheumatology at Montefiore, who served as her laboratory mentor. “Other students really looked up to her.”

This natural ability to lead and to be a mentor was instilled in Ms. Doerner as a young child growing up in Hackensack, New Jersey.

“I come from a family of teachers,” she explained. “My mother was a special education teacher and from the time I was a baby she’s been the director of a daycare center.”

Watching her mother educate others helped shape Ms. Doerner’s traits as a mentor, but it also left her with a thirst for knowledge. She became interested in the problem-solving aspect of science and took a number of AP classes, as well as participated in Rutgers’ Waksman Student Scholars, where she performed hands-on scientific work at the university.

“Even with this exposure, I still didn’t really know much about research as a career, or anything about a Ph.D.,” she said. “When I left for college, I thought I would ultimately go to medical school to become a doctor.”

Instead, en route to earning a dual-degree in biochemistry and in molecular biology, and a master’s degree in molecular and cellular biology from the University of Massachusetts Amherst, Ms. Doerner caught the research bug.

She made the decision to earn her Ph.D. while working as a technician at the Rockefeller University and for personal reasons she determined she’d focus on autoimmune diseases.

“My mother was diagnosed with multiple sclerosis,” she explained, “and even though I was not specifically working on her disease, there are many things you can learn from one autoimmune disease that can be applied to others.”

According to Ms. Doerner, a colleague at Rockefeller encouraged her to pursue her studies at Einstein—a recommendation she is happy she heeded. 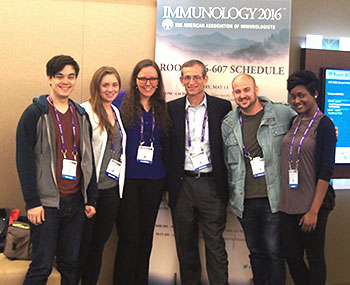 Graduate students in the lab of Dr. Chaim Putterman pose with their mentor at a recent conference. (From left): Evan Der (PhD student), Sammy Chalmers (PhD student), Jess Doerner, Dr. Putterman, Ariel Stock (MSTP student) and Elise Mike (MSTP student).“You could tell that students were involved and supportive of one another, which was important to me,” she said.

“Science today requires a team to put together a project, and Jess truly understood this from the very beginning,” said Dr. Victoria Freedman, associate dean for graduate programs in the biomedical sciences. “She was eager to join a community of scientists.”

That community included a number of mentors, in particular her thesis advisor Dr. Putterman, who welcomed the young scientist to his lab to work on a skin project related to his research on lupus.

“Chaim allowed me to grow as a scientist in so many ways. He encouraged me to contribute to the writing of manuscripts and to make presentations at conferences,” she said. “He recognized the skills I already had and offered ways for me to expand them, helping me become a more well-rounded scientist.”

Dr. Putterman was equally complimentary of his protégée: “Jess completely changed the culture of the lab, broadening its collaborative atmosphere.”

Take, for example, the number of published papers featuring her name. These include two papers for which she was first author (the second is currently under review), along with several papers by colleagues for which she contributed work.

“Science is not a one-person journey. You can’t accomplish anything without other people’s help,” she said. “Because of how we worked together in the lab, our skillsets and knowledge increased, and it was an exciting environment to work in.”

Beyond the lab, Ms. Doerner served as a voice for her fellow graduate students, taking on numerous leadership roles, including co-chair of the graduate student council (GSC), chair of the GSC events committee, student senator and representative to the faculty senate council.

“Serving in leadership roles allowed me to build relationships with my fellow students and also with faculty members,” said Ms. Doerner. “I felt as though I was contributing to the culture of Einstein while hopefully making positive changes that future students can benefit from.”

“She’s the type of person who other students naturally go to for support and advice,” said Dr. Freedman. “She’s a good friend and a great listener.”

Recently, after successfully defending her thesis earlier this year, the soon-to-be officially hooded Dr. Doerner left Einstein to start a postdoctoral fellowship at the University of Pennsylvania where she has altered the focus of her research to focus on the innate immune system and its response to intracellular pathogens.

“I thought it was important to push myself and leave my comfort zone a bit,” she said. Even so, she still finds time for mentoring Einstein students who seek her out.

While she’s not certain what her own future may hold, she remains excited by the prospect of research. “I know I’ll stay at the bench as long as it stays challenging and fun.”

“She’s going to do great things,” predicted Dr. Putterman. “It’s only a question of time.”