Late on a Thursday afternoon, a group of first-year medical students scrub up, sponge down their work stations and prep for surgery. 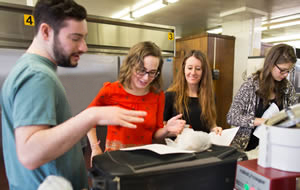 Students review the recipes before getting to workTheir operating theater: the kitchen of the Lubin Dining Hall.

Their goal, as set forth by Dr. Carol-Jane Segal-Isaacson, assistant professor of epidemiology & population health: to prepare a healthful five-course dinner in two hours.

The occasion: a session of “Cooking Healthily, Efficiently and with Fresh Foods,” or CHEFF, a course for first- and second-year Einstein students. Since its debut in 2015, the popular six-week elective has caught on with its target audience like a “Top Chef” quick-fire challenge.

Developed by Dr. Segal-Isaacson following a discussion with Dr. Marti Grayson (M.D. Class of 1979), senior associate dean for medical education, the advent of CHEFF reflects a growing trend to bring the health benefits of good nutrition and health-promoting dietary behaviors into the mainstream of American medical education.

“With obesity and associated chronic diseases on the rise, it’s vital that clinicians encourage their patients to adopt healthier eating and exercise habits,” said Dr. Grayson.

“Studies show that physicians who prepare and eat healthy meals themselves find it easier to communicate the value and importance of good nutrition to patients,” added Dr. Segal-Isaacson.

CHEFF was inspired by the work of Dr. David Eisenberg, a professor of nutrition at Harvard’s T.H. Chan School of Public Health and founder of Healthy Kitchens, Healthy Lives, an annual continuing medical education course cosponsored by Harvard and the Culinary Institute of America in Napa Valley, CA. “It’s exciting to know that medical professionals—from students to cardiologists and gastroenterologists—are learning how to cook delicious, healthful meals,” said Dr. Segal-Isaacson. 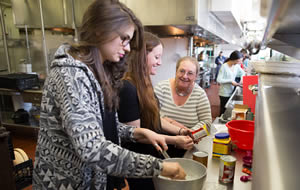 Dr. Segal-Isaacson checks on students’ progress during their preparation of the meal“A central component of maintaining good health is to avoid dependence on processed foods, which are full of excess sugar, salt and fat,” noted Dr. Segal-Isaacson. “Over the last 50 years in the United States, we’ve become disenfranchised from the process of preparing our own food. We need to reclaim it.”

Dr. Segal-Isaacson’s passion for healthy cooking dates back to her teens when she was a big fan of Laurel Robertson and Frances Moore Lappé, two pioneers of the healthy food movement of the late 1960s.

In addition to her wealth of experience as a professional chef—including managing the kitchens of a group of health spas and coauthoring a cookbook for women with HIV/AIDS—she holds a doctorate in nutrition education from Teachers College, Columbia University.

True to her culinary roots, she’s made fresh produce, whole grains, fish and poultry the mainstays of CHEFF.

CHEFF is open to students with all levels of cooking experience. Along with learning how to wield a professional-grade chef’s knife, they explore cooking techniques such as steaming, braising, baking and sautéing. Each session starts with a discussion of the ingredients and techniques to be covered, along with their history, nutritional value and health impact.

Students work in pairs to produce a multicourse meal, with each duo responsible for one course. A different ethnic cuisine is showcased each week to give the future clinicians a “taste” of the culturally diverse patient population served by Einstein and Montefiore. 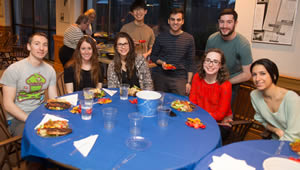 Students get set to enjoy their mealDr. Segal-Isaacson offers healthy alternative approaches to cooking traditional dishes and encourages students to experiment with appealing flavor combinations. Her clearly written recipes are designed for cooks with limited time and budgets—including the students themselves.

“Medical school can be stressful,” she said. “It’s important for students to practice good self-care.” To that end, she provides menus that make it easy to whip up tasty, nutritious meals in a small apartment kitchen. She also introduces apprentice chefs to foods that may be new to them. “We roasted some rutabaga and they were amazed at how delicious it was!”

Pre- and post-course questionnaires measure CHEFF participants’ nutritional-assessment and counseling skills. Each student also does a dietary self-analysis, recording their food and beverage intake for three days and analyzing the data. They then draw up a behavioral contract targeting a dietary behavior they’d like to improve. “It’s what they would do with a patient,” said Dr. Segal-Isaacson.

They also delve into different dietary approaches researching an established complementary nutritional approach such as Mediterranean, the DASH diet (short for “dietary approach to stop hypertension”), or low carbohyrdrate, and preparing several representative recipes to help prevent, treat and manage the condition.

An Appetite for Knowledge

“Medical students today are much more open to health education than when I started teaching at Einstein more than 20 years ago,” noted Dr. Segal-Isaacson.

Chaim Szachtel, a second-year student and a CHEFF alumnus concurred. “I’ve seen many patients whose health problems—such as obesity, diabetes and hypertension—can be traced, in part, to unhealthy eating habits,” he said. “Before the CHEFF course it never crossed my mind to ask patients about their diets. Now, whenever I take a social history, I ask.

“I also learned how to make interesting dishes, like Chinese steamed dumplings,” he added. “Now, if I have a Chinese patient who fries food, I can suggest steaming.”

First-year Mandy Ghias remarked, “I want to be able to explain healthy substitutes that are culturally relevant to each patient, and this is a great way to learn.”

Savoring the Fruits (and Vegetables) of Their Labor

Heeding their lessons on the role of presentation in creating an enticing eating experience, the group sat down together to enjoy an attractively plated dinner in the Singer Faculty Club dining room. Each pair then described how they prepared their portion of the meal.

Dr. Segal-Isaacson’s vision for growing CHEFF includes a fourth-year elective and a teaching kitchen near Montefiore where CHEFF alumni can share what they’ve learned with people from the Bronx community.

CHEFF is offered in the spring and fall. The next class, for second-year students, starts in August.