Kim Ohaegbulam loves basketball. The M.D./Ph.D. candidate has played the game his entire life, so when he started medical school six years ago he joined friends in Einstein’s intramural basketball league to take a break from his studies.

EEP students work on an experiment supervised by Hoops 4 Health co-founder Kim OhaegbulamThat led to an idea. Rather than use basketball as a break from science, could he use basketball to expose local Bronx kids to science? Could he use the game he loved to teach young Bronxites about health and nutrition?

“While lots of local kids love basketball and have access to places they can play, it seemed they didn’t have similar exposure to things outside their community, like science,” he said. 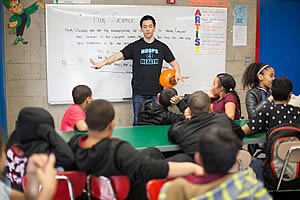 Hoops 4 Health co-founder Kevin Shieh discusses an experiment the young students will doIn the two years since its founding H4H has flourished, transforming into a program that introduces Bronx youth to science while also fostering mentorships among students of different ages and backgrounds.

“In addition to attracting other medical students with a penchant for basketball and science to the program, four high school students who are enrolled in the Einstein Enrichment Program (EEP) have joined the program’s team,” noted Heather Archer-Dyer, director of the CBSL. “This has offered Einstein students the opportunity to mentor teen-agers, who in turn can help with mentoring the younger kids taking part in Hoops 4 Health.”

The Einstein team brings its program to elementary-age students taking part in the Police Athletic League (PAL), located in the Longwood neighborhood of the Bronx. Each month, H4H volunteers travel to the PAL where they divide time between conducting scientific experiments with the youngsters and overseeing physical activities and lessons about nutrition.

According to Tier’a Berry, PAL program coordinator, “The kids don’t need any additional motivation to do the science. We offer them a lot of athletic activities, but we lack science programming. So whenever the Hoops 4 Health students come, they are way more excited about the science.”

She added, “I love that the experiments focus on the human body and health, like experiments on DNA, blood types and other things that could have tangible meaning for them.” 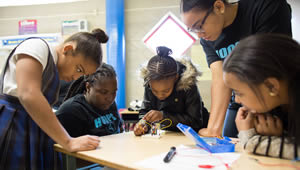 Hoops 4 Health student leader Tonya Aaron (seated left) and EEP student Mirna Gonzalez (standing) supervise some youngsters during an experiment On a recent Hoops 4 Health Wednesday afternoon, fifth grader Scarlet Reyes was excited when she sank a few baskets during the five-on-five basketball game. But she was more excited to leave the gym for the second half of the program. She and her friends would be conducting an experiment to determine the sugar content of different foods and drinks.

“I like doing the experiments because we don’t do them in my school,” she said.

“We’ve targeted fourth and fifth graders for our program because studies show if students aren’t exposed to STEM subjects by that age, they are less likely to be interested in science later in their education,” noted Tonya Aaron, a first-year medical student who played basketball for Rollins College in Florida and for Trinidad and Tobago’s Olympic national team during Olympic trials. “We want them to feel excited about science and to know it’s something they can do.”

H4H team members are studying the impact the program has had by surveying their young participants at the beginning and end of each school year. They recently presented their initial results at the Association of Prevention Teaching and Research conference held in New Mexico. 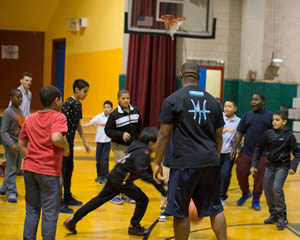 Mr. Ohaegbulam out on the PAL basketball court with some of the young students taking part in Hoops 4 HealthAlthough providing mentoring to young Bronx teens was not part of the initial H4H mission, it’s now one of the strengths of the program. The four EEP students work closely with their Einstein student mentors in designing the experiments that are presented to the younger kids. The older students train the teens in how to guide the PAL youngsters in doing the experiments. This dynamic helps the older students hone their mentoring and leadership skills and the younger ones to develop theirs.

When they get to the PAL, the high school students mentor the younger Bronx students while the Einstein students offer supervision.

“I get to talk to the kids in a teacher role during the science experiments and to play sports with them,” said 17-year-old Abdul Mustafa, a senior at All Hallows High School.

“We all work together,” added Aldemar Guzman, 16, a junior at All Hallows. “We’re like equals.”

“Mentoring high school students is a way to give back,” observed Ms. Aaron. “They like basketball, but they also like medicine and science, and it’s great to see young minority males so interested. It’s rewarding to be able to encourage that.”