Illuminating the Physics of MRI

“Just fantastic!” “The man is a rock star!” “I’ve binge-watched the past few days and am excited about the next chapters!” If you think these superlatives were inspired by the hero of an edgy new Netflix series, think again. 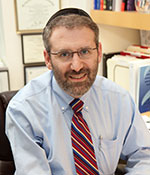 The rave reviews—from radiologists in training and practice, radiologic technologists, students, researchers and others in the medical community—are for “Introducing MRI,” Dr. Lipton’s course on the physics of MRI technology.

While the scholarly professor of psychiatry and behavioral sciences and of neuroscience might seem an unlikely YouTube sensation, the e-mails and posts he receives from across the globe suggest otherwise. The accolades pour in from grateful health professionals and scientists—some based in remote, rural outposts—who are learning how to mine the power of a life-saving tool they use routinely but whose inner workings eluded them, until they found Dr. Lipton on Einstein’s YouTube channel.

Dr. Lipton’s Internet stardom began two years ago, when he posted the videos of the week-long intensive he’s been presenting to members of the Montefiore-Einstein community since 1997.

“Many clinicians and researchers are eager to take fuller advantage of the benefits MRI offers to patients and to medical science,” he explained, “but they haven’t had the time or opportunity to study and actually understand the physics behind the technology.”

The global demand—and the dearth of user-friendly educational resources—prompted him to share his expertise via the popular online platform. In split-screen format, he breaks down complex concepts into “bite-size” pieces. On the right side, he lectures while drawing on a white board to illustrate the ideas he presents; the left side features close-up views of his drawings as they take shape.

Reading Beneath the Surface

View the first in a series of 56 videos in which Dr. Lipton discusses the physics of MRI. The full complement of videos are accessible via this link to the Einstein YouTube channelMRI technology harnesses several strong and rapidly changing magnetic fields, an antenna and a computer to produce detailed, three-dimensional pictures of the body’s internal structures. The images are used to detect and diagnose conditions ranging from cancer and diseases of the liver, heart and brain to sports injuries and fetal anomalies—and to monitor treatment.

Because it’s non-invasive and eliminates the need for damaging radiation, MRI is highly valued by medical professionals. But most would be hard-pressed to explain exactly how the technology works.

“Residents and fellows in radiology typically look at the MRI pictures much as they would a photograph,” noted Dr. Lipton. “They apply their knowledge of anatomy and pathology without fully understanding the physical basis for why the images look the way they do.

“MRI images are so sensitive, they reveal things you might not see even if you cut open the body,” he said. “It’s essential to be able to read beneath the surface.”

In his 35-hour course, held twice yearly in the Gruss Magnetic Resonance Research Center, Dr. Lipton employs a “highly interactive, largely non-mathematical” approach to making the basics of physics comprehensible to MRI users at every level. Based on his book, “Totally Accessible MRI,” the course syllabus covers such topics as how to measure an MRI signal and terms such as “rotating magnetic field,” “spatial localization,” “conjugate symmetry” and “K space.” 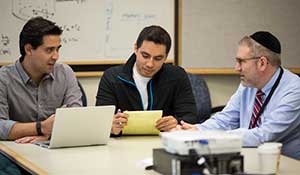 Dr. Lipton (at right) chats with (from left) Felipe Carmona and Miguel Oliva, who traveled from Chile to take part in the course.Hannah Milch, a third-year radiology resident at Montefiore who plans to specialize in breast imaging, took Dr. Lipton’s course this past March.

“Most teachers rely heavily on PowerPoint slides,” she noted. In contrast, “Dr. Lipton has an amazing ability to literally draw the content for you. For five straight days, you’re watching him think it and create it on the spot.”

She continued, “This topic is complicated, but Dr. Lipton is patient. He speaks slowly and clearly. Each statement builds logically upon the previous thought. If you ask a question, he spontaneously comes up with different ways to give the answer, until it sinks in.

Dr. Lipton wants his students to become “informed users.” He explained: “I want them to go back to their clinical settings, or their labs, able to understand what the images do and to discern whether what they’re looking at is real or not.”

An informed user would know, for example, that what might appear at first glance to be pathology might really be an “artifact”—a feature that shows up in an image but isn’t present in the imaged object. It’s important to know how to recognize artifacts because they can result in false negatives or false positives.

MRI technology is constantly evolving. One recent innovation, called parallel imaging, has sped up image production. But parallel imaging has a troublesome side-effect: it can cause objects on the outer edges of the body to show up in the middle of the image.

To illustrate this phenomenon during a recent class session, Dr. Lipton showed an image of a human brain with what appeared to be a worm inside the patient’s cerebellum. The “worm” was an artifact caused by parallel imaging: it was actually the patient’s ear!

Teach It, And They Will Come

Felipe Carmona and Miguel Oliva, experienced MRI technologists from Santiago, Chile, were so impressed by Dr. Lipton’s virtual classroom that they flew to New York in March—underwriting part of their own travel expenses—to attend his class.

“We want to advance in our careers and share the latest information with colleagues who come to us for training,” said Mr. Carmona. “Seeing Dr. Lipton on YouTube giving his detailed, in-depth explanations motivated us to go directly to the source.”

Liane Hunter, a fourth-year M.D./Ph.D. student in the Lipton lab also took the course to better inform her studies of genetic and inflammatory biomarkers and their impact on health outcomes in soccer heading. “MRI is a growing field. Knowing how images are generated and how to analyze them will be essential for any researcher or practicing physician,” she observed.

She added, “Whatever field I decide to go into, thanks to Dr. Lipton’s teaching, I’ll think about MRI-based studies more critically, instead of taking them at face value.”