In 2005, Einstein lost one of its beloved faculty members on the eve of commencement when Dr. Marshall S. Horwitz, then professor and chair of microbiology & immunology, died suddenly while attending the graduate student dinner. The desire to remember Dr. Horwitz and his many contributions to Einstein – as a researcher, attending pediatrician at Montefiore, mentor and colleague –led to the establishment of the Marshall S. Horwitz, M.D., Faculty Prize for Research Excellence. The prize is awarded to an Einstein faculty member whose contributions to research in his or her field exemplifies the excellence and contributions made by Dr. Horwitz during his nearly 40 years on the Einstein faculty. 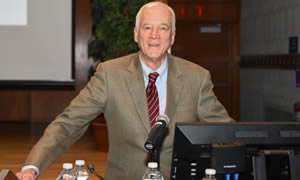 Scott Emmons, Ph.D.On Monday, February 29, 2016, members of the Einstein community gathered in Robbins Auditorium for the tenth annual Marshall S. Horwitz Faculty Prize lecture, which is given each year by the Horwitz Prize recipient. This year, Dr. Scott Emmons, professor of genetics and Siegfried Ullmann Chair in Molecular Genetics, was awarded the prize for his innovative research in the field of connectomics, which describes how the synapses of the nervous system are connected.

“Marshall was a kind, generous and scientifically curious ‘mensch,’” noted Dr. Richard Kitsis, who led the selection committee this year. He also introduced Dr. Jonathan Warner, who offered fond remembrances of his longtime friend and colleague.

“In addition to his love of talking about science, Marshall could keep a fuse box going without calling an electrician,” recalled Dr. Warner. “The contributions he made through his research were instrumental to furthering our understanding of adenovirus biology.”

Among those in attendance were Dr. Horwitz’ wife and fellow Einstein colleague Dr. Susan Band Horwitz, distinguished professor of molecular pharmacology and Rose C. Falkenstein Chair in Cancer Research, and their sons, Josh and Bruce. “My family and I look forward to this event every year, said Dr. Horwitz. “It offers a wonderful way to remember Marshall’s scientific contributions and dedication to Einstein, and I know he would be pleased to have his name associated with research excellence.” 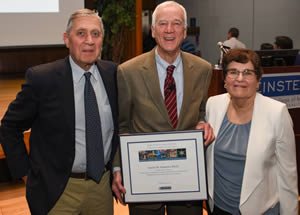 Dr. Emmons poses with Drs. Spiegel and Horwitz after receiving his Horwitz Prize“There’s no better tribute to my dad than to honor Einstein's best and brightest each year with the Marshall S. Horwitz Prize,” agreed Josh Horwitz. “As a non-scientist I always look forward to coming to Einstein for the lecture, because I am always amazed by the puzzles that Einstein scientists are unlocking, and because it brings back such warm memories of my dad.”

“Many of my parents’ colleagues at Einstein have been role models and mentors for my own career,” added Dr. Bruce Horwitz, who is a pediatrician and researcher like his father. “It’s always wonderful to be in their presence when we remember my dad and the special connection we feel for Einstein.”

At this year’s lecture, Dr. Emmons presented “Adventures in Biology with a Worm,” in which he detailed his focus on the genetic basis of morphology in the C. elegans male (worm) over the past three decades. Early on, this led him to identify key regulatory genes and sparked his current interest in connectomics, the study of synaptic connections in the nervous system.

In the early 2000s, with the help of his student Jonathan Lipton, he discovered that the male worm will abandon a meal in order to seek out mates. The data from these experiments served as a launch pad for investigations into male behavior, including the multi-step behavioral program of male copulation.

Realizing that the male connectome represented a missing piece of the worm phenotype, Dr. Emmons enlisted the help of a talented programmer, Meng Xu. In 2012—two years, 170 neurons, 64 muscles and 8,300 synapses later—Dr. Emmons and his team published a paper in Science providing the first connectomics data since the C. elegans wiring diagram introduced in 1986. This research detailed the complete map of the wiring for the nervous system governing mating behavior in the adult male worm.

The Emmons team’s publication was awarded the American Association for the Advancement of Science’s Newcomb Cleveland Prize for the most outstanding research article published in Science that year.

In Dr. Emmons own words, there is, “a remaining missing piece: how do genes encode the wiring diagram of the nervous system?” Having set out with the goal of reading the genetic code and finding out how genes determine the organism’s properties, research into connectomics has placed Dr. Emmons right at the frontier—and in the best position —to take on this question and more.

(To view slideshow of photo gallery, click on an image below; then move your mouse over the left or right margins to navigate.)