Home > Features > A Day of Immersion and Inspiration: Einstein First-Years Get Acquainted with the Bronx

A Day of Immersion and Inspiration: Einstein First-Years Get Acquainted with the Bronx

Did you know that the Bronx got its name from the Bronx River, which was named for Dutch settler Jonas Bronck? Or that Van Cortlandt and Pelham Bay are New York City’s largest parks? These and other fascinating facts—along with cultural treasures such as the Bronx Zoo, hip hop and the New York Yankees—were spotlighted at an event held in Robbins Auditorium on Friday, August 14, 2015, to introduce Einstein’s newest medical students to the borough they’ll now call home. 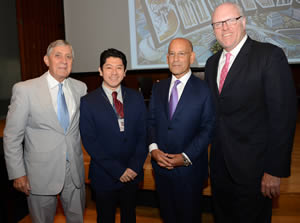 Among the speakers students heard from were (from left) Dr. Allen M. Spiegel, Einstein’s Marilyn and Stanley M. Katz Dean.; Dr. Pablo Joo, assistant dean for medical education and event coordinator; Dr. Steven M. Safyer, Montefiore president and CEO, and class of 1982; and Congressman Joseph CrowleyThe half-day session, “Introduction to the Bronx Community,” capped a busy Orientation Week for the Class of 2019. Serving as master of ceremonies, Dr. Pablo Joo, assistant dean for medical education, told the students, “Today you’ll learn about some of the joys and challenges of working in the Bronx. You’ll also learn about the borough, its history and the spirit and resilience of its people.”

Next, Dr. Allen M. Spiegel, the Marilyn and Stanley M. Katz Dean at Einstein, welcomed the new arrivals, noting, “You’ll have the privilege and challenge of interacting with citizens of the Bronx in a unique way, experiences that will help you become scientifically excellent as well as humane and compassionate physicians.”

Dean Spiegel then introduced a member of the Class of 1982: Dr. Steven Safyer, president and CEO of Montefiore Health System. Alluding to Dr. Safyer’s eight years of service in Montefiore’s Rikers Island Health Services, Dean Spiegel observed, “His leadership at Rikers epitomized the skills and ability he brings to his present position.” 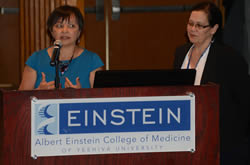 Dr. Maria Marzan and Ana-Julia Cruz discussed opportunities in Einstein’s Community Based Service Learning ProgramIn his remarks, Dr. Safyer noted that Einstein and Montefiore are rooted in shared values of humanism and social justice. After recalling some highlights of his own Einstein orientation–which was just one day and included meeting his wife, Dr. Paula Marcus, now a psychiatrist at Einstein and Montefiore—he introduced United States Congressman Joseph Crowley, who represents Einstein as part of New York’s 14th District.

“I’ve known Congressman Crowley for 10 years and have worked closely with him. Joe sits on the Ways & Means Committee. He defends medical education, graduate medical education and science. He represents the people of this community with passion—creating jobs, protecting seniors and keeping Medicare and Medicaid strong. He works tirelessly to ensure a strong stream of federal revenue to support Einstein in its mission. He’s also a voice for democracy and human rights around the world, which dovetails with Einstein’s work in global health.”

Congressman Crowley enthused, “New York City is home to people from hundreds of different nations and cultures. Our strength is in our diversity, and you’ll see a lot of that during your time here in the Bronx. Einstein has long recognized that we need a physician workforce that is up to the task of caring for these diverse populations, and that patients are better served when they feel a connection with their doctor.”

Praising Einstein’s commitment to encouraging diversity in both the medical workforce and its student body, he noted that nearly 1 in 5 members of this year’s class was born outside the United States. “You are coming from different experiences, but you share a common goal. You will have at your fingertips a population that needs doctors—and you’ll have an opportunity to help guide them on a healthy path.”

The next presenters highlighted some of the social and economic issues that affect the lives and health of many Bronx residents, and how Einstein is making a difference.

Dr. William Jordan leads a panel discussion on communicating with patientsDr. Maria Marzan, director of Einstein’s Community Based Service Learning (CBSL) program, and Julie Cruz, manager of the Office of Diversity Enhancement, described the many opportunities for students to gain hands-on experience with a wide range of patient populations in the Bronx, through CBSL projects initiated and run by Einstein students. They invited first-years to attend a CBSL networking event and to “continue the legacy” of the founding CBSL students.

Heather Archer-Dyer, director of community health outreach in the department of family & social medicine, followed with a multimedia historical overview of the Bronx and its diverse communities. She also referenced a number of the housing policies that helped set the stage for the healthcare disparities plaguing some of those communities today.

Rounding out the program, Dr. Bill Jordan moderated a panel of three Montefiore physicians and a fourth-year Einstein student who offered valuable insights and words of wisdom. Among the key messages they imparted: “Learn to communicate with patients in their own language, ask the right questions and always treat those entrusted to your care with compassion and respect.”

In concluding the presentation, Dr. Joo advised, “Now get out of here and go out into the community. There is no better way to get to know the Bronx than pounding the pavement of its streets!” After lunch, many did just that – heading out on guided tours of Westchester Square, the Grand Concourse and the South Bronx, eager to explore their new surroundings.