Even before college, Steven Almo's future was crystal clear.

At his high school in North Miami Beach, he worked with scientists at University of Miami Medical School who altered the function of protein molecules by chemically modifying them. After each experiment, the scientist put on stereoscopic glasses to view the molecules' X-ray structure in three dimensions. 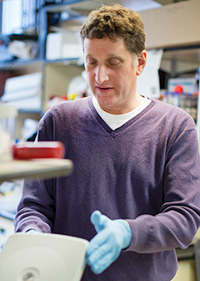 Dr. Steven Almo in the lab"I soon realized I didn't just want to look at those pictures, I wanted to make them," recalled Dr. Almo, who is professor of biochemistry and of physiology and biophysics at Einstein. So he earned a Ph.D. in biophysics and became a structural biologist specializing in X-ray crystallography.

Knowing All the Angles

High resolution X-ray crystallography is an imaging technique in which X-ray beams are shot through purified, crystallized proteins. The beam scatters in different directions, allowing scientists to construct a detailed, 3-D model of the crystallized protein's molecular structure. Measuring the intensities and angles of the diffracted beams reveals the position of each atom in the protein.

Knowing a protein's structure at the atomic level provides insight into its function and how it interacts with other proteins—information that scientists can use to target and manipulate proteins involved in causing disease.

"Cancer, autoimmune disease and infectious disease are all protein-driven," explained Dr. Almo, who also is the Wollowick Family Foundation Chair in Multiple Sclerosis and Immunology. "If, for example, a cancer researcher finds that a particular protein signals a cell to start dividing uncontrollably, determining its structure can lead to a drug that binds to the protein and deactivates it."

In 2010, Dr. Almo's lab was awarded two NIH grants, totaling more than $40 million, to take part in a pair of multicenter projects, the Protein Structure Initiative and the Enzyme Function Initiative. Both projects aim to characterize the structure and function of the millions of proteins and enzymes discovered using high-throughput genomic sequencing technology.

The Enzyme Function Initiative (EFI) brings together investigators at a dozen national institutions, each with a particular expertise. 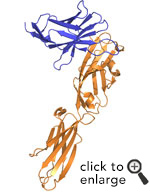 This image depicts the structure of the PD-1:PD-L2 complex, determined in the Almo laboratory. (PD-1 is blue; PD-L2 is orange.) read more >"Our specialty is high-throughput protein production and characterization," said Dr. Almo "We're really good at purifying, crystallizing and determining protein structures at a high rate, and we've developed screening tools that give initial clues about a protein's function."

The EFI works like this: Findings from Dr. Almo's lab may suggest that an enzyme converts one small molecule into another. Then, enzymologists in a different part of the consortium carry out experiments to determine whether this activity occurs in vitro. If it does, then microbiologists and analytical chemists determine whether the in vitro activity has any physiological relevance in a living cell. "It's a complex, multi-disciplinary process involving several different institutions, but it's really the only way to do this kind of work," said Dr. Almo.

The Protein Structure Initiative (PSI) is also a multicenter consortium. Here, Dr. Almo's lab is studying proteins that control the activity of T cells—immune-system cells that normally become activated to attack cancer cells as well as cells infected with viruses and bacteria. But overactive T cells may attack and kill healthy cells, leading to autoimmune disorders such as lupus or rheumatoid arthritis. And underactive T cells are associated with several types of cancer.

Dr. Almo and his team are focusing on a number of immune-regulatory proteins, including two receptor proteins found on the surface of T cells: CTLA-4 (Cytotoxic T-Lymphocyte Antigen-4) and PD-1 (Programmed Cell Death Protein-1). Stimulating those receptor proteins puts the brakes on T cell activity—important for keeping the immune system in check and preventing unwanted autoimmune responses. Unfortunately, cancer cells and infected cells are known to use the same strategy to evade the immune response. Those cells possess surface proteins that bind to and stimulate the PD-1 and CTLA-4 receptors present on the T cells attacking them. As a result, the T-cell attack is thwarted and the malignant or infected cells escape to spread disease.

"If we could remove the brakes on the immune response by inactivating CTLA-4 or PD-1, that would enable T lymphocytes to mount a much more robust immune response against these cells," explained Dr. Almo. "Conversely, you could treat autoimmune diseases by boosting levels of those two receptor proteins that tamp down T lymphocyte activity."

Pharmaceutical companies are racing to market drugs that fight cancer by inactivating CTLA-4 or PD-1 receptors. The first such drug received FDA approval in 2011: Yervoy is a monoclonal antibody (a man-made version of an antibody) that treats advanced melanoma by locking onto and blocking CTLA-4 so that tumor cells can't use the receptor to suppress T cell activity. 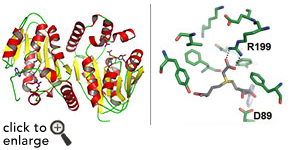 At left is a structure of CmoA, determined in the Almo laboratory. read more >Ideally, Dr. Almo's research will lead to new drugs for treating cancers, autoimmune diseases and infections caused by microbes resistant to even the most powerful antibiotics. This work will occur in Einstein's newly launched Center for Experimental Therapeutics, created specifically to speed the flow of new therapies from lab bench to bedside. One of the center‘s key functions involves convening and coordinating Einstein researchers to carry out some of the steps involved in drug development—steps that would include finding targets to exploit for treating disease and identifying and designing chemical compounds to hit those targets.

In September 2013, the NIH's National Institute of General Medical Sciences (NIGMS) announced it will no longer fund the PSI after the current grant ends in 2015.

"Critics of the PSI have questioned whether large-scale programs have a biological impact," said Dr. Almo, noting that such critics "tend to be biased toward supporting the discovery capabilities of individual laboratories rather than far-reaching, cutting-edge consortia such as the PSI."

But prematurely pulling the plug on the PSI could mean wasting a major investment in time and money—just when payoffs are beginning to accrue.

For example, over the past several years, Einstein has spent several million dollars on automated tissue culture robotics to make large quantities of important human proteins involved in immunity. "We're now at the point where we can apply this protein production infrastructure to improving human health," noted Dr. Almo. "You couldn't ask for a better set of projects with genuine relevance to human disease. But such projects can't be done by a single investigator—they absolutely require different institutions working collaboratively."

"To carry out those projects," said Dr. Almo, "we're actively pursuing other funding—whether from other institutes at NIH, other government agencies or philanthropy. I'm confident that over the next several years we'll see exciting opportunities for solving medical challenges through immunological research, and we plan to be at the forefront of those research efforts."